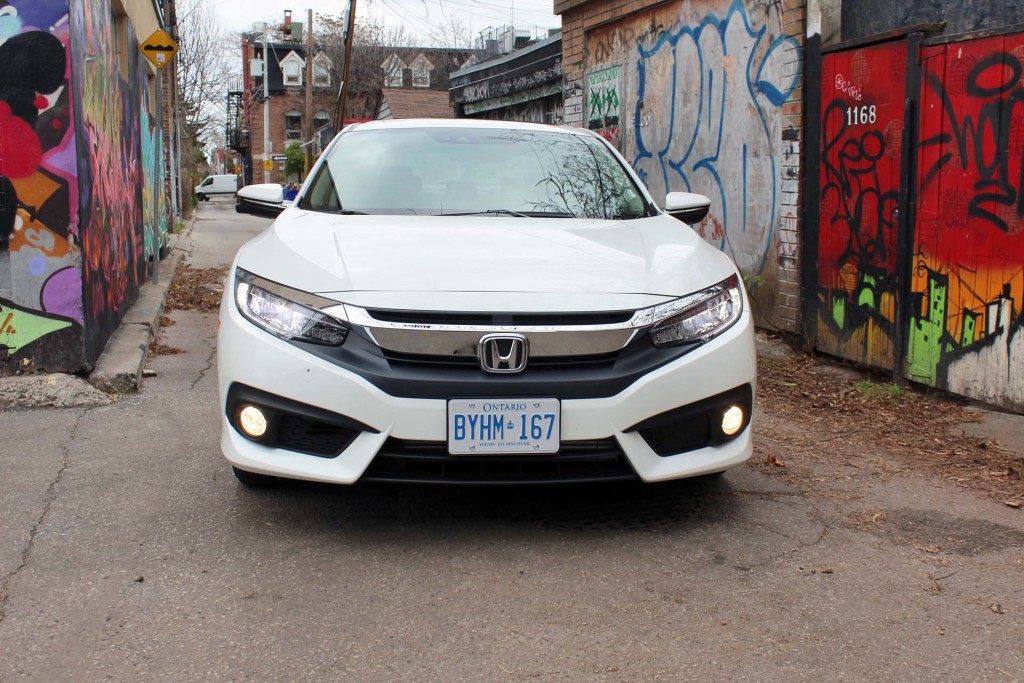 The Honda Civic has been the best-selling car in Canada for like… ever.

It’s so far removed from any Civic that has come before, I’m having a hard time convincing people this car actually is a Honda Civic.

Expertly reflecting our national taste in vehicles, the Civic has resolutely stood for solid, basic, economical and reliable transportation, with a dash of driving flair on the side. Granted, there hasn’t been much of the latter lately. In fact, the outgoing ninth generation Civic pretty much lost step with he program. Not a year after being launched in the fall of 2011, Honda hauled it back into the workshop to address criticisms leveled at its sub par interior quality, uninspired handling and somewhat dull styling. The fact that they’ve been smearing lipstick on this car for four years seems not to matter much. It’s still the top seller here.

With this fresh from bumper to bumper 2016 Civic, Honda sure ain’t going down that path again.

And the weird thing is, it’s so far removed from any Civic that has come before, I’m having a hard time convincing people this car actually is a Honda Civic. It’s lower, longer, wider, has a daringly creased and rakish “four-door coupe” profile, and in this Touring trim it’s all blinged out with 17-inch alloys, full LED headlights, ritzy chrome accents and a “Turbo” sticker just ahead of the rear wheel well. Turbo? Honda? Does not compute.

Exhibit A: I pick up a friend. He eyes the sculpted exterior and then hops in the leather lined, soft-touch cabin. He asks me how much it costs. “What? Only 27 grand?” he replies incredulously. Then I tell him it’s the new Civic. Complete shock. 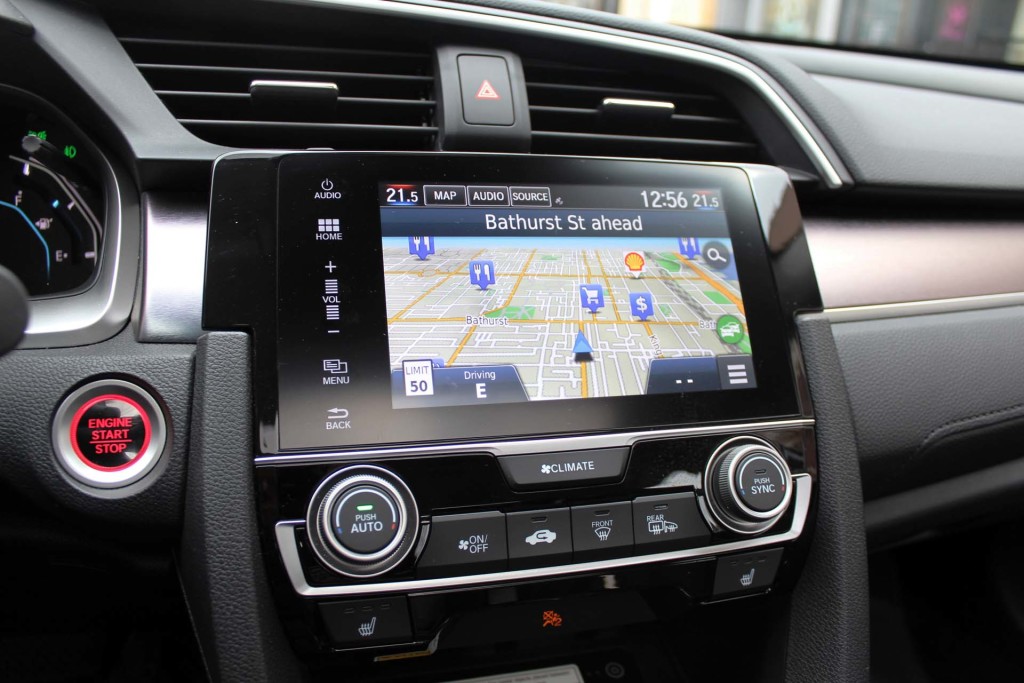 Exhibit B: My neighbor recently purchased a Acura TLX. On spying the Civic he comes over and asks “What’s THAT?” Total surprise when I tell him the nameplate… and the price. His response: “I should have bought one of those.”

Sit in the Touring’s nicely contoured leather seats and you’re an inch lower than last year’s model. The cowl is low, giving the Civic a more sporty feel and fine outward visibility. You face a high quality dash that no longer features the Civic’s signature two-tier instrument panel. Look through the wheel and there’s a large, fully digital speedometer with various info displays within, including a turbo boost graph. To the right, a fuel gauge. To the left, temperature gauge. No tachometer though. Centre dash is a flush 7-inch infotainment screen, and below some hard buttons for HVAC.

In a press to make all things iPad-cool, Honda has determined humans have no need for a rotary volume knob anymore – despite all that tactile, opposing thumbs business that hundreds of thousands of years of evolution has bestowed upon us. So to change audio volume, you can either poke away at a digital slider icon on the screen, or use the admittedly slick control on the steering wheel that combines a slider function with a rocker switch. Or you can do what I did for the first couple of days – reach over and crank up the temp control, utter some unprintable epitaphs, and then turn the heat back down.

Other than that, the infotainment works quite well. Phone pairing was quick, navigation programming intuitive, and the pinch a swipe screen proved very useful when navigating through city streets. I could quickly zoom in, out and swipe ahead to see what was coming up. 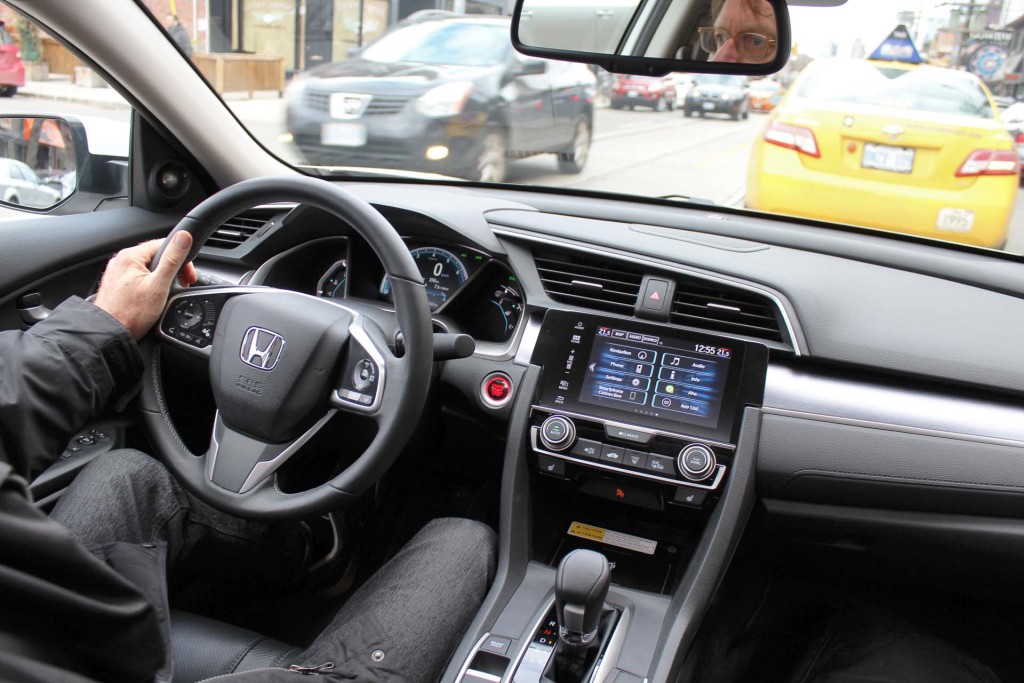 Taking a cue from the Koreans who are steaming up the Civic’s tail, Honda is not being stingy with the equipment level here in the Touring. We get sunroof, adaptive cruise, proximity key with push button start, collision mitigation, lane keep assist, heated rear seats, wireless phone charging, full smart phone integration with Apple CarPlay and Android Auto, nav, full LED headlights, and Honda’s LaneWatch that shoots an rear-view image from the right side of the car when the right signal is activated. The 450-watt 10-speaker audio kicks pretty good too.

There’s a deep storage bin under the centre armrest, a hidden Volvo-esque cubby behind the “floating” centre console, and trunk volume shoots up by about 20 percent.

Okay, so the 2016 Civic Touring get some pretty slick duds both inside and out. What’s it like to drive?

The 2016 Civic rides on a new platform that will also underpin the next Accord. It is 25 percent stiffer than the old one, 31 kg lighter and wheelbase is up by 30 mm. The upper trim lines (EX-T and Touring) get an all-new 1.5L twin-scroll turbo four that generates 174 hp and 162 lb-ft from 1700 rpm. It drives the front wheels through a CVT (continuously variable transmission). This is the first time Honda has offered a turbocharged engine in our market. Fuel economy is pegged at 7.6 L/100 km city, 5.5 hwy and 6.7 combined. I saw 7.5 L/100 at the conclusion of the week.

The engine feels strong, showing just a bit of turbo lag, but the CVT is tuned to keep the four in its meaty torque band, so under normal operation the drivetrain is smooth and quiet. It’s only when you really floor it does the engine drone, but at least the car is making good progress. Put the shifter in S (sport) and the engine spins about 1000 rpm higher, giving more instant acceleration at the expense of noise and fuel economy.

The steering is numb on-centre, but turn in is quick and it weights up when hitting a bend. Which this Civic seems to do quite nicely. It’s an agile thing, sporting a well-tuned front strut/rear multi-link suspension setup that has it tucking into corners with poise and vigor.

Ride quality is generally good, and the cabin quiet due to extensive measures Honda has taken with sound insulation. Getting under the sloped rear roofline might be an issue for taller passengers entering the rear quarters, but once inside there is a bit more legroom, if not generous headroom. Again, you sit low back here, adding to a sense of sportiness.

So does this full-on 2016 Civic Touring with its new turbo mill hark back to the nameplate’s fun-to-drive days of yore? Kinda. It’s quick, handles well and the nose points into a bend like a Beagle on the scent, but it’s not the type of Civic that begs to be thrashed. No, this sophisticate arrives with near-Acura levels of luxury and kit, at a price that has my neighbor, for one, scratching his head.

Yes, it is a Honda Civic, okay?