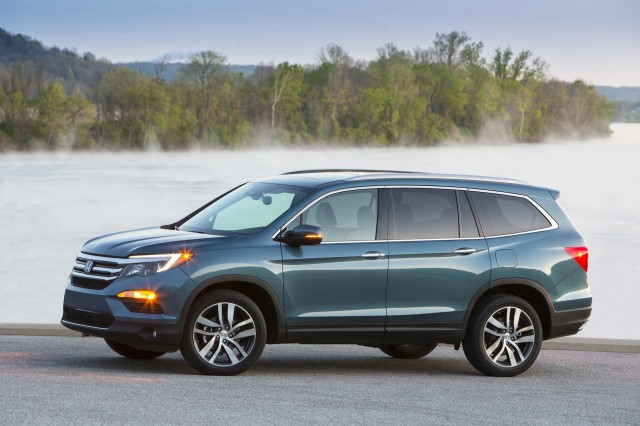 Spring finally is here, and for The Car Connection’s editors, that typically means it’s time to hit the road for miles and days on end.

This spring, we’ve been hitting the road–a lot–in the long-term 2016 Honda Pilot Touring AWD that joined our test fleet earlier in the year.

With rivals like the Ford Explorer, Nissan Pathfinder, and Hyundai Santa Fe, the Pilot has some big orders to fill. That’s before you factor in an excellent new Chrysler Pacifica minivan that’s in the same neighborhood of utility and flexibility.

The Pilot has to nail the “utility” part of “sport-utility vehicle,” has to comport itself with the mild-mannered ride and handling of a “crossover,” and frankly, it has to prove itself to be the great deal we thought when we named it TCC’s Best Car To Buy 2016.

The question of the day is, which Pilot does the best job as family support vehicle–Pilot LX, EX, EX-L, Touring, or Elite?

A refresher on what we’re driving–it’s a white Pilot Touring with all-wheel drive. New on arrival, it’s now over the break-in mileage limits, and turning in something north of 20 miles per gallon combined. (We’ll report more on fuel economy in a post very soon.)

Keeping us entertained on the long slogs it’s taken up the eastern seaboard and down Tobacco Road, the Pilot has high-output USB ports for powering smartphones in modem mode; a Blu-Ray rear-seat entertainment system; and a touchscreen infotainment system with satellite radio (a present saved for Chill, just as with every press car on the planet), and navigation. Remote start, keyless ignition, and a power tailgate top off the functional bits.

On the safety front, we’re already finding ourselves missing a conventional set of blind-spot monitors, though the Pilot’s wide-angle rearview camera is handy. We’re mixed on its LaneWatch side-view camera and its lane-keeping assistance, but more on that, also, in future posts.

Out the door, our Pilot would cost $43,870 at the dealer, before haggling.

All told, the Pilot Touring’s base price comes in at $43,700. According to Honda’s information and pricing Web site for shoppers, there’s already been a $170 price increase.

How we’d order it

Sure, you could save some money on your Honda Pilot. If we were ordering one to keep as a forever car, we’d focus on three of its five trim levels, with a careful hand on the pen that checks some expensive options.

The skipper: The base $31,045 Honda Pilot LX is a trim level we’d skip. It comes with the V-6 and a 6-speed automatic, a combination we’ve sampled and thought well of; front-wheel drive, with an option for all-wheel drive; the usual power features; a cloth interior; touchscreen audio with a USB port; 17-inch wheels; and air conditioning. What the LX lacks are some features that make families choose a big crossover SUV over a sedan or a smaller vehicle, touches like an easy-sliding second-row seat, or even safety features such as a forward-collision warning system. Honda will let you pay $382 for a tent that drapes over the Pilot LX’s rear end–but at this price point, you can’t opt into some of its better safety and convenience touches, at all.

The value meal: The $34,380 Pilot EX is the Honda crossover SUV for big families on a smaller budget. Over the LX’s standard features, it adds remote start; satellite radio; two more USB ports; and air conditioning for the back two rows. For an extra thousand bucks–$20 a payment on a 48-month loan–it’s well worth adding the Honda Sensing safety suite. In addition to the EX’s side-view camera, it adds adaptive cruise control, lane-collision warnings, forward-collision warnings with automatic emergency braking, and lane-keeping assistance.

The supersize value meal: The $37,895 ups the price of the Pilot, and pours on the gravy. It comes with heated front seats; a second-row seat that slides at the touch of a button; a sunroof; a power tailgate; and leather. Navigation, all-wheel drive, and a rear-seat Blu-Ray system add even more to the price.

The sweet spot: If you’re able to spend more than $40,000 on a new family wagon, we don’t see much wrong with the $42,970 Pilot Touring. Among the key differences with other trim levels, it adds a 9-speed automatic as standard equipment, along with the Honda Sensing tech gear; navigation; the Blu-Ray DVD system; and parking sensors. It also has five USB ports and a 115-volt outlet, making it the penultimate gaming crossover, we think.

The money no object ute: For drivers who cross-shop the Acura MDX and don’t want something quite that brand-conscious, there’s the $48,370 Pilot Elite. At just under $50,000 before accessories, it gets a bigger sunroof; ventilated front seats and heated rear seats; LED headlights; a heated steering wheel; second-row captain’s chairs; and HD radio. On this trim, a preferred set of blind-spot monitors takes the place of the side-view camera; it’s the one feature we wish Honda would cut loose and free-flow through the order sheet, since the feature is standard on some low-trim family sedans that cost less than $25,000.

You’ll also get Honda Sensing, but in this trim it drops the LaneWatch camera in favor of more conventional blind-spot monitors with rear cross-traffic alerts—a system we prefer for its all-around accident prevention.