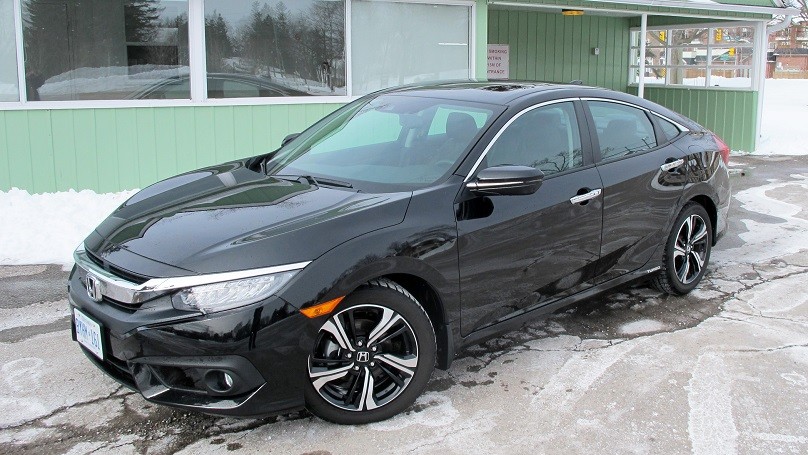 That the Civic carried all before it was no surprise to just about every car writer I know and a huge vote of confidence to all the men and women who assemble the Civic at Honda’s Alliston plant.

This is also being shown in sales, with the Civic now chalking up its 18th straight year as Canada’s best selling car.

Civic has come a long way from 1973 when it bowed as a diminutive three-door, to the 2016 model which marks the start of its 10th generation.

In addition to the sedan, a coupe version is coming soon and will be followed by high-performance Si models, a five-door hatchback and the first-ever Civic Type-R model for the Canadian market.

The sedan is available in five trim levels, base DX, LX, DX, Touring (as tested here) and Si. 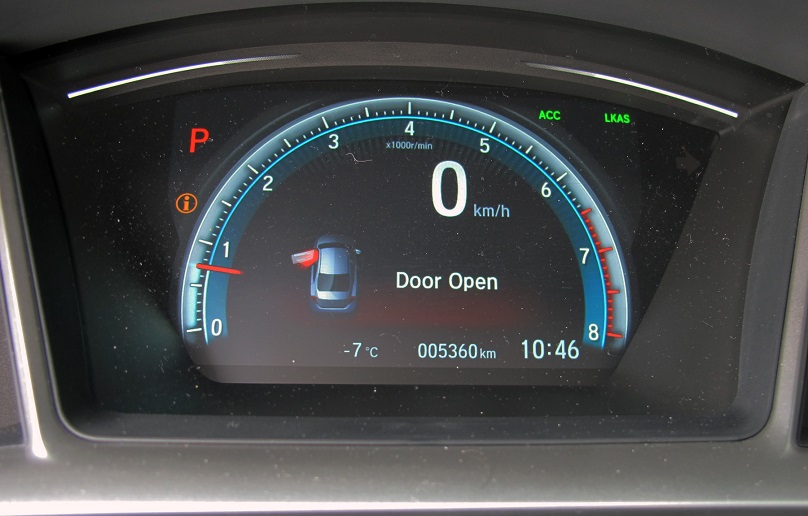 For many years, the Civic was mild in looks and power, but the reliability and strong resale value made it a hit with Canadians.

For 2016, Honda pulled out all the stops starting with daring styling, with the swept-back roof that gives the four-door sedan a coupe-like persona. A very short rear deck gives it a bob-tailed look, aided by the dramatically curved forward LED taillights.

Walking up to it, the Civic looks bigger than its compact car classification in Canada.

If we were in the U.S., the Environmental Protection Agency (EPA) considers Civic a mid-size car based on combined passenger (2,769 litres) and cargo (428 litres) volume.

At the media launch of the Civic last fall, I remarked to a Honda official that I thought the back seat was bigger than a BMW 5 Series. They looked into it, and yes, there is 2.1 inches more legroom in the Civic.

From the front especially, the Civic has a lower looking stance, thanks to the hood and roof being 40 mm and 20 mm lower respectively. At the same time, the front end is 30 mm shorter, while the wheelbase is 30 mm greater, leading to the overall sense of greater size. 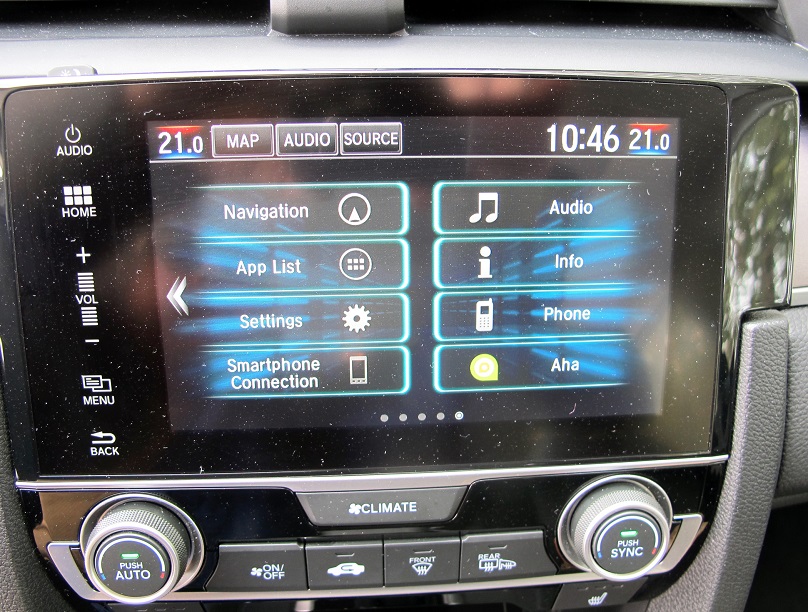 There’s good news on the inside with the unusual two-tier instrument panel replaced by a very large driver information display and a centre stack infotainment screen.

Tested here is the Touring model in leather and all the bells and whistles. In a rich black paint, the Touring looks like an entry-level mid-size luxury sedan, not a humble compact.

Another thing that gives the Touring that luxury sedan look is the high and low beam LED headlights with auto off/on.

The front-drive Civic is powered by two new engines, starting with a 2.0-litre port injection four-cylinder with 158 hp and 138 lb/ft of torque with a choice of six-speed manual or CVT. This engine is found on the DX, LX and EX. 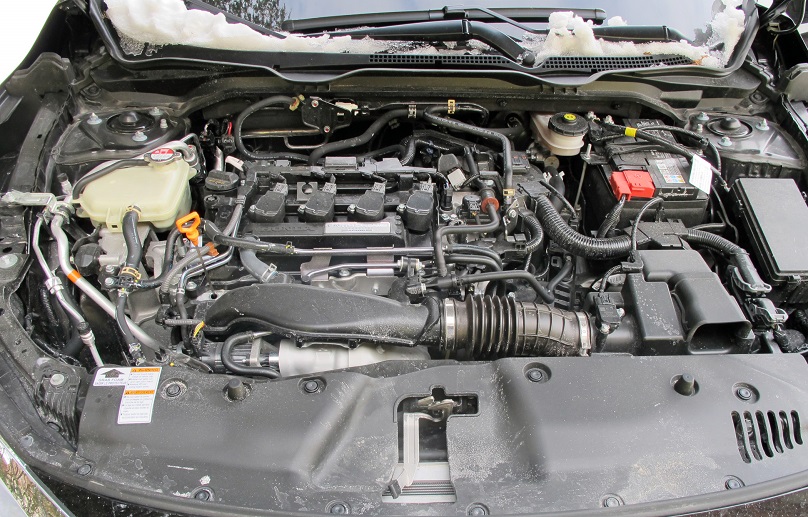 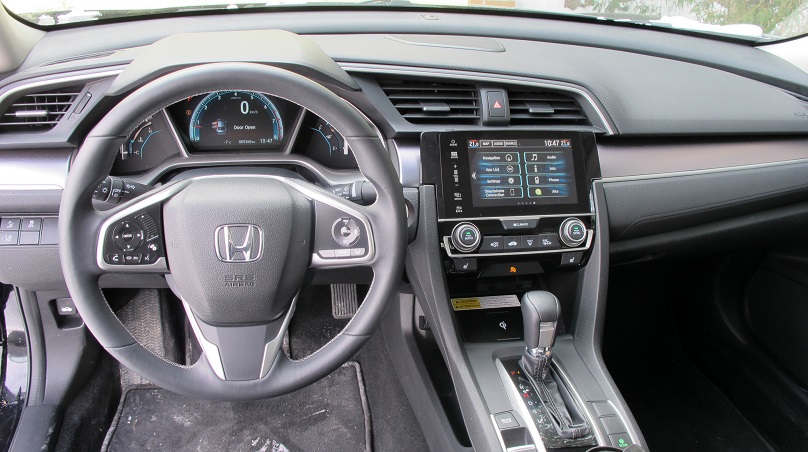 When I drove the Civic at the press launch last fall, I noticed a bigger difference between the ride and handling of 2.0-litre and 1.5-litre, which I later learned was due to Honda re-jigged the suspension with grade specific tuning including shocks, springs, stabilizer bars and bigger wheels, resulting in the marked difference between the two, with Honda claiming best in class handling agility.

I used the Touring to pick up a friend at the airport who remarked several times about the quality of the ride and could not believe we were in a Civic, not a luxury sedan.

I was pleased to see Honda made a backup camera standard, along with its available LaneWatch system that has a camera on the lower part of the right outside mirror. 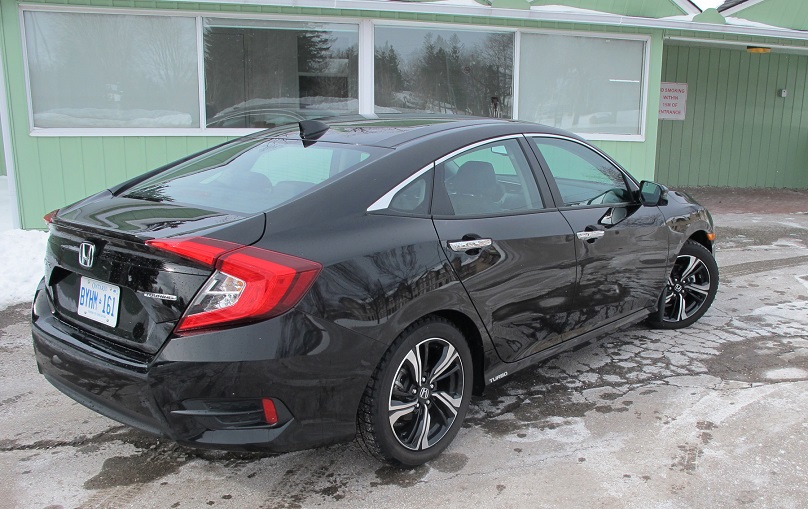 When you flick on the right turn stalk, the camera pops on showing what is behind you on the right. Not only does it make turning a breeze, but the real benefit is, when passing, you can activate the stalk and you can see who and what is gaining on you – brilliant.

This by far the best Civic yet and I won’t be surprised to hear a year from now it is Canada’s best selling car for 19 years in a row.

By: Jim Robinson of Wheels.ca